History of the Bernese

Leading into the history of the Bernedoodle

The Bernese Mountain Dog breed began as various tri-colored farm dogs in the rural area of Berne, Switzerland.  The distant origins of the Bernese Mountain Dog are not well documented.  The breed apparently had its origins in the mastiff type dogs brought by the Romans when they came into Switzerland around two thousand years ago.  The Roman dogs were used to guard and drive herds brought with the invaders.  Over the centuries, since Roman times, these dogs remained as general purpose farm dogs, for guarding property, to drive dairy cattle long distance from the farm to the alpine pastures, as well as pulling cart from farm to market.   In this time of development, little attention was paid to preserving the type of breed.  Indeed, near the end of the 19th century, the breed was nearly extinct.  Fortunately, around the turn of the century, several Swiss dog fanciers realized that ignoring the many good qualities of the old native breeds would be a mistake.   These pioneers brought Bernese from various isolated valleys in their home canton of Bern, and promoted the general interest in these dogs.   The breed was originally called the Schweizerische Dürrbach-Klub; after the name of the hamlet and of the inn of Dürrbach, Switzerland where the dog was first developed.

In 1902, 1904 and 1907 subjects of this breed were exhibited at dog shows.  In 1907 a few breeders of the region of Burgdorf decided to promote the pure breeding of this native dog by founding the "Schweizerische Durrbach-Klub" and fixing the characteristic traits of the breed for the first standard. The Dürrbächler (eventually called "Berner Sennenhund" to follow the naming convention of other native swiss breeds) progressed steadily in Switzerland, and eventually found admirers in other countries as well.
​
Current records indicate that the first reported American imports were a pair brought to the United States 1926 by Isaac Scheiss, a Kansas farmer.  Mr. Scheiss failed in his attempt to register the pair with the American Kennel Club.  Ten years later, Glen Shadow of Louisiana, imported another pair, Fridy v. Haslenbach and Quell v. Tiergarten.  Through the efforts of Mr. Shadow and other fanciers, the AKC officially recognized the breed in 1937, with Fridy and Quell the first Bernese registered in the U.S.  The breed increased only slightly in numbers in the United States before 1941, when World War II interrupted further importation.  After 1945 importation and registration continued.

Interestingly, in 1947, there were a great many discussions about bringing in an outcross because of issues like temperament problems (excessive shyness, etc.), a general lacking in bone substance and other maladies.   In 1948, perhaps in response to these discussions, there was a total outcross breeding with a Newfoundland Dog named Pluto v Erlengut.   Most believe this breeding to have brought solid temperament, bone substance and other good things to the Berner breed.  Alex v Angstorf, a direct descent of that Newfie, is considered to be the progenitor of our current standard Bernese breed type. 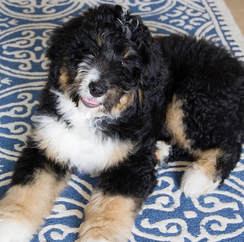 The Bernedoodle came about by taking the majestic, Bernese Mountain Dog and breeding it to the famous, intelligent Poodle.  In this complimentary pairing the sweet, gentle temperament of the Berner comes alive with the non-shedding nature and aptitude of a Poodle.  The outcome is a beautiful, intelligent, friendly companion, that also make for exceptional service/therapy dogs.

Berenedoodle puppies come in multiple colors; black and white bicolor and a variety of sable,  phantom and the classic, tri-colored markings of the Berner (which is the most coveted of the coats).

Everyone knows that poodles are smart.  They are the "go to" smart dog for service animals, therapy animals, etc.  Less people are aware of how smart Bernese Mountain Dogs are (unless you've owned one).  We feel like Bernese Mountain Dogs are as smart as Poodles (and even smarter in some situations) but it is not as evident because a propensity toward being stubborn or fearful.  For example, if you tell a poodle to do something they understand and strive to please and they obey.  Sometimes (not always) if you tell a Bernese Mountain Dog to do something they will also understand but due to fear or their own will, they may try not to do it.  The issue though is not intelligence but fear and/or will depending on their situation.  So far, when we've bred the Bernese to the Poodle, we have found that they loose the will and fear issue but gain a hybrid vigor in intelligence.  We have many instances where we have been able to teach a six or eight week old puppy something in just one try.  They are surprisingly quick to learn and make excellent service dogs.  We will add that this trait can also be a downside if you are not consistent.  A Bernedoodle that has an inconsistent family learns that very quickly and you can run into difficulty if you don't buckle down on how you are communicating with your dog.

Since Poodles can be on the high energy side of the spectrum, when they are bred to labrador retrievers (high energy) to get a labradoodle or a golden retriever (medium to high energy) to get a godlendoodle, those mixes tend to be more high energy.  Since Berners are on the medium to low energy side of the spectrum, a Bernedoodle tends to be more medium energy.  We feel like this is what makes the perfect pet!  A Bernedoodle is alert, bright eyed and happy to play but is also very content to sit at your feet while you read a book (as long as it is touching you).  This, to us, defines the best pet.